Since the first series of Love Island in 2015, the male contestants have become known for their manicured appearance, especially when it comes to their hairstyles. But has the lockdown trend of overgrown beards spurred more rugged looks among the reality stars?

The UK beard care and shaving specialists The English Shaving Company compared the grooming habits of the male finalists from each past Love Island series against the 2021 season’s finale three men to reveal how men's hair care trends have evolved. 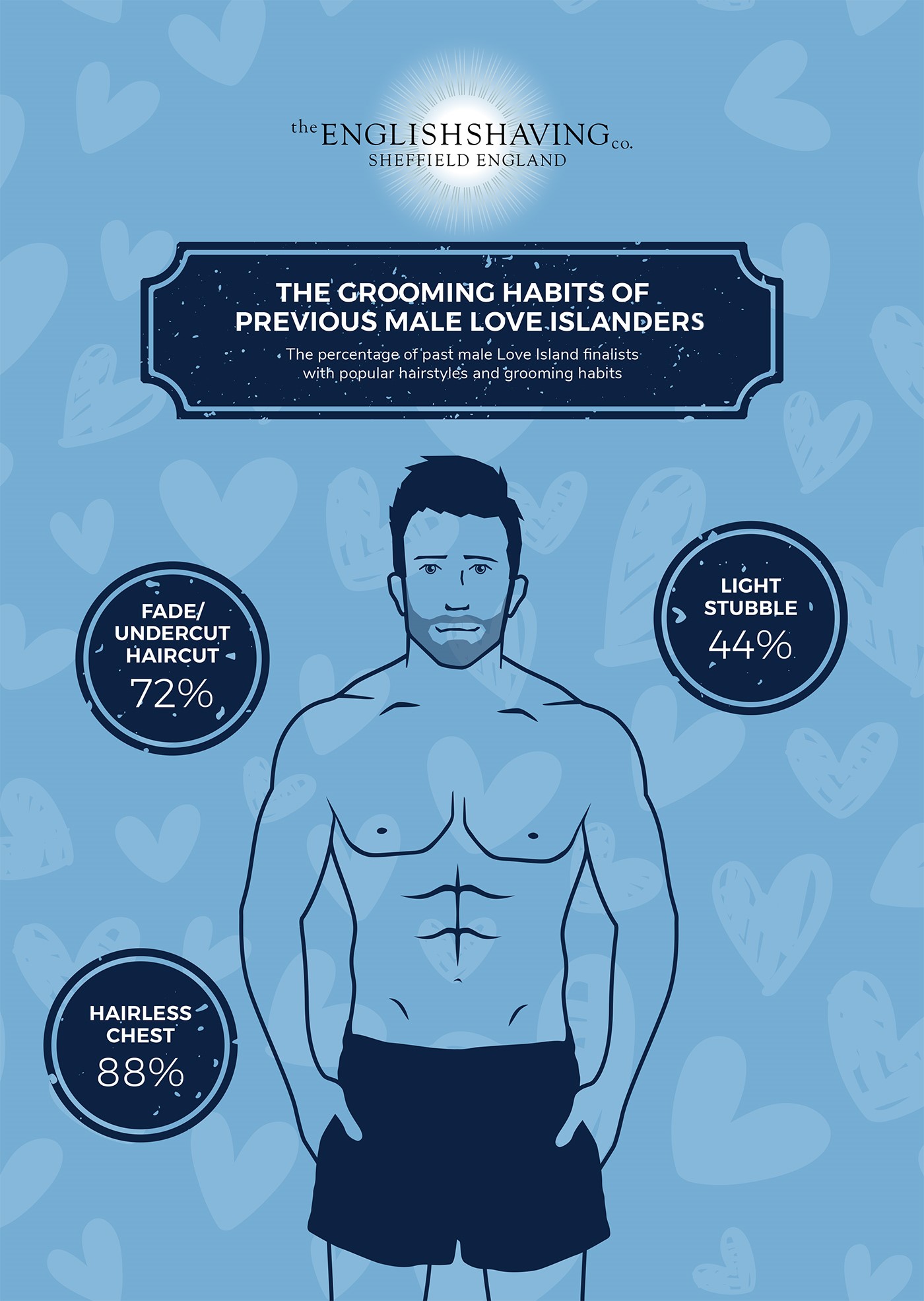 Hairless chests were clearly a favoured look among previous male Love Islanders, with 88% of past finalists opting for this style.

However, this year’s winner Liam Reardon sported a hairy chest, alongside the contestant Jake Cornish who walked out of the competition, taking fifth place.

The research found that light stubble was the most popular facial hair among previous male Love Island finalists, with 44% preferring this look. Following this style, with 33%, was a medium-length stubble, known as designer stubble. In fact, all of the male winners had styled their facial hair in one of these two styles.

From season five, the facial hair became bolder among finalists, with Ovie Soko rocking a goatee, which featured again on the series six runner-up Luke Trotman.

By the seventh series, Finn Tapp became the first winner with a classic beard, and a forerunner to the popularity of beards during lockdown.

All of this year’s male finalists donned thicker facial hair, with Liam Reardon sporting designer stubble and 66% opting for the goatee.

The Hairstyles and Facial Hair of Love Isand Winners 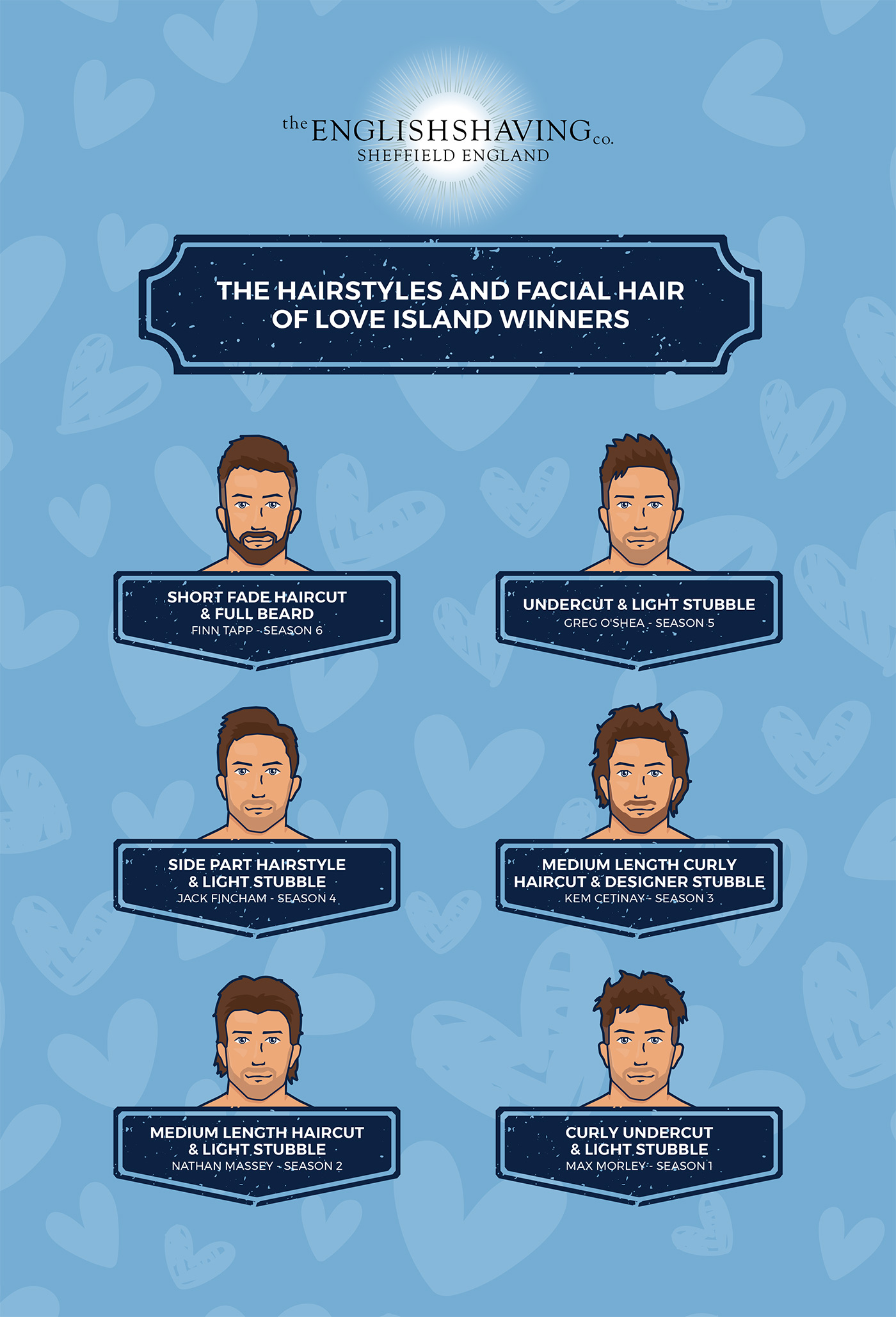 Fade haircuts remain as the favourite

In the previous seasons, 72% of finalists had their hair styled in a type of fade, which remains as the favoured haircut, with all the 2021 male finalists opting for this look.

However, the Love Island men have opted for various versions of this style, such as an undercut fade which creates a more apparent disconnect between the longer hair on top and the short back and sides. Some of the finalists had a more subtle fade, accompanied with a crew cut, or paired a high fade with a slicked-back quiff.

The other categories of hair from the past six series included a buzz cut and medium-length hair, with both styles seen on 11% of male finalists. The least popular look was a side-parting style, only donned by a small 5%.

Brown is the most popular hair colour

Out of the 2021 top three male finalists, 66% have brown hair, and 33% have black hair. This trend hasn't changed much over the years, as brown hair featured on 50% of the finalists in the previous six series, while a third had black hair.

Of the past male finalists, 16% were blonde, whereas none of this year’s male finalists had this hair colour, suggesting a decline in popularity. None of the men in the research had experimental hair colours either. 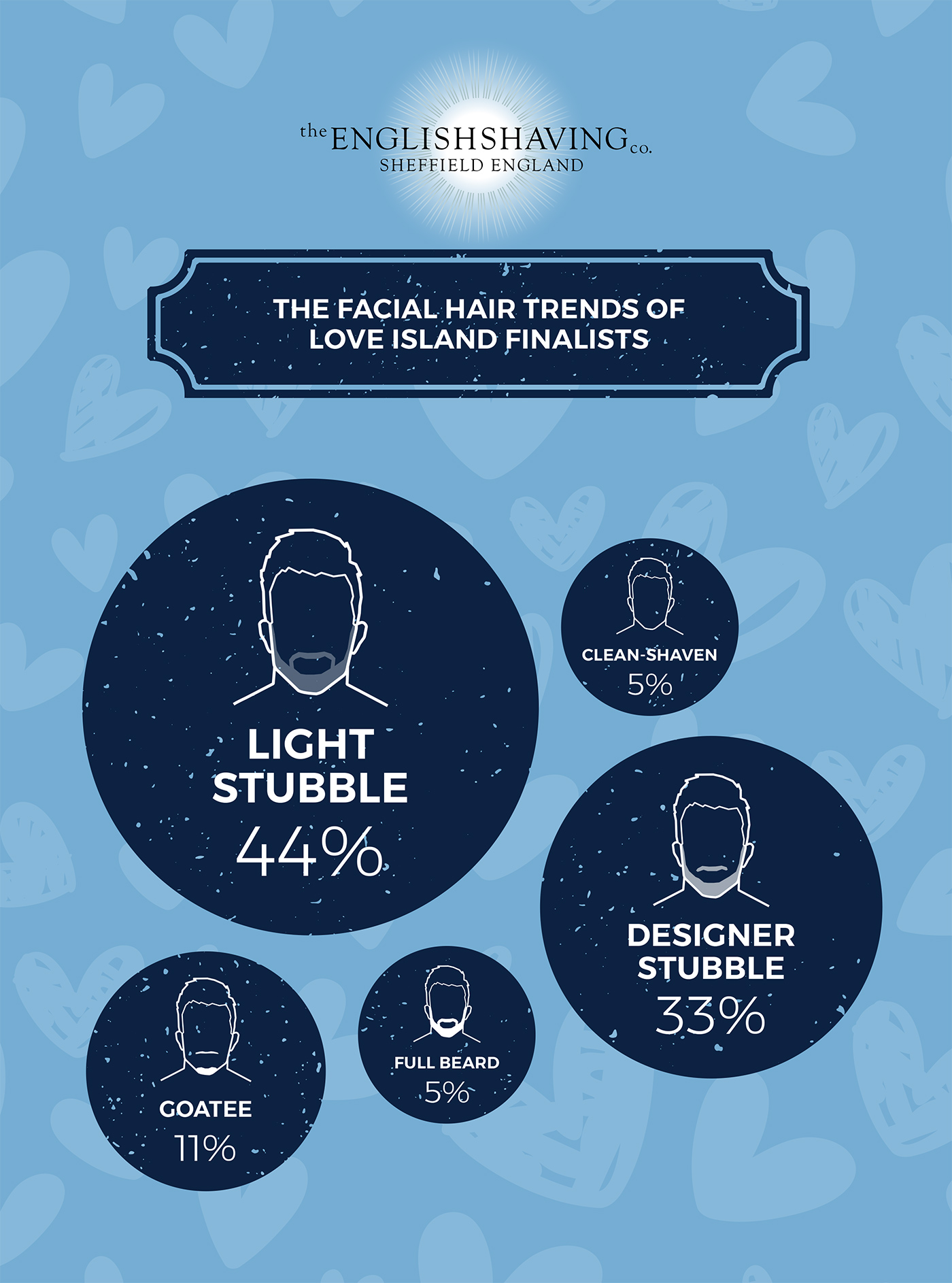 Tania Fulton, Spokesperson for The English Shaving Company, says: "Most of the male Love Island finalists of previous years were very well-groomed with manicured facial hair and smooth chests. While this year's contestants still seem to be caring for their appearance, with coiffed haircuts, they're opting to maintain and emphasise their facial hair.

"The increase in men embracing facial hair may be a continuation of the lockdown beard trend, with some choosing to keep and style the hair they grew through the pandemic.

"While the public has voted for male winners with a more polished aesthetic previously, their preferences seem to have also changed along with this trend. We predict that with this win for hairier looks, the public will opt to maintain the beards they’ve grown over lockdowns.

"The facial hair of the male finalists seems to have become more experimental over the last few years, too, stepping outside of the conventional styles of the classic beard and light stubble.

"Men were historically discouraged from caring for their appearance, being told it wasn't masculine. However, Love Island completely changed this message.

"Although more Love Island men are keeping their facial hair, maintaining any style of beard requires a regular grooming routine."The celebration of 'modern men' on TV screens across the country shows men that it's more than acceptable to develop a beauty regime, from waxing their chest to following a luxurious shaving routine with moisturising shaving soaps and quality razors."

About The English Shaving Company

Established in 1999, The English Shaving Company is a leading supplier of beard and hair care products within the UK and around the globe. The official home of Edwin Jagger, they offer a range of artisan products that enhance the appearance, fragrance and style of beards and moustaches.

The English Shaving Company is the specialist supplier of beard oils and conditioning washes that improve the sheen and healthiness of facial hair. The oils, moustache waxes, and beard balms ease the shaping of facial hair, while their grooming tools, safety razors and beard trimmers aid with shaping and styling.

Enhance the appearance and ease the maintenance of your facial hair with The English Shaving Company’s grooming and beard care ranges.